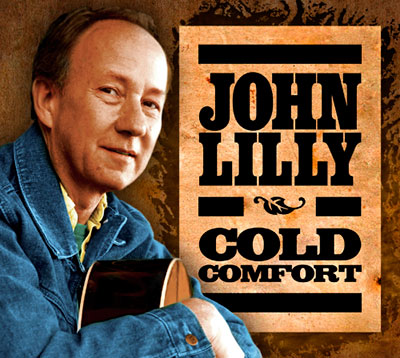 The self-released Cold Comfort is the album John Lilly has been building toward all along. The West Virginian retreated to a small-town studio south of San Antonio for the bulk of the tracks, bringing in Bill Kirchen (guitar), Bobby Flores (fiddle), Floyd Domino (piano) and Kayton Roberts (one of Hank Snow's steelers!) to set the tone. If you're convinced country music peaked when honky-tonk and rockabilly were in their prime, this CD will be your new fave; it brings out the natural hick in a person. Joyful or ferociously sad, these songs make you want to be part of them.

The opening track, Come And Go won John Lilly $5000 two years ago, in a song writing competition to find the 'Next Great Road Song'; a great road song it is, but more importantly the money part financed the album which deliberately sets out to pay homage to country music styles from the State of Texas. It delivers on that promise handsomely with excellent new songs, arranged and performed just right; from the title track's twin fiddle opening bars and pedal steel lick which wraps itself around the song like a comfortable blanket, to the footstompin', stand up double bass slappin' chug of I-95 - a song about loving a truck driver's wife. Short And Sweet provides a wonderful Western Swing feel and one can believe it might have been found on an old Bob Wills album rather than being the brand new song it is. Similarly close your eyes and imagine Willie Nelson singing Anyone But You and you will appreciate how well this Texas tribute works.

And it is the quality of the writing which makes it work so well. I Thought You'd Never Call is the heartbroke ballad which should be playing on the juke box as two or three couples shuffle morosely around the dance floor in every mid-west movie you've ever seen. In both Step By Step, which reminded me of the sort of offering The Mavericks were putting out in the early days of their career, and Two Miracles Lilly gives us memorable numbers with hooks which stick in the subconscious to re-appear in a whistle or a snatch of song days later. As an unashamed admirer of quirky/clever/amusing lyrics I loved Done Done It and the caveat emptor message of As Is provides a very interesting basis for a song. A nice touch too with the final track, Somewhere In Texas, which features just John Lilly and an acoustic guitar delivering his own music with delicious simplicity.

This is a cracker of an album which may, as a self release, be difficult to track down here in the U., but worth tracking down and adding to your collection it most certainly is.

'Pleasant' sounding albums such as this often run the risk of being accused of having a lack of soul, but this man has such a huge talent it's impossible to not be drawn into these incredibly creative and atmospheric stories. It shows the level of esteem in which John Lilly is held by the quality of the support players on this always pleasant, at times edgy album. Amongst others he is helped out by Sonny Landreth and Bill Kirchen on guitars, Tim O' Brien on fiddle and guitar, Johnny Staats on mandolin, the gorgeous vocals of Brennen Leigh, and so the list goes on. All of the songs are written by John Lilly and cover an extraordinary range of subjects and tempos, but always with his pleasantly expressive vocals at the root, although credit must be given to Tom Lewis's drumming and Ric Ramirez bass playing for underpinning everything brilliantly, thus allowing the other featured musicians free rein.

His vocals are at times a little reminiscent of singers such as Bobby Vee or Buddy Holly and the music stylistically and quality wise has a lot in common with the upper echelons of 1940s and 50s 'Country & Western,' but fortunately steers clear of the formulaic 'Nashville sound' that dominated latterly. The playing as you would expect, is of the highest quality and whilst there is a little sugariness at times in the overall sound the album oozes quality and has an almost indefinable edginess that is probably due to the fact that this is the music Lilly grew up with and comes to naturally, rather than through any commercial contrivances.

The scope and range of his songs is difficult to describe in a few words but the tempos are varied and cover unsurpassable two part harmonies on the gorgeous ballads I thought you'd never call and I don't know where to start, with Brennen Leigh's beautiful voice being as perfect a blend with his as it is possible to get. Anyone but you is a sad slow, moody cheating ballad with gorgeous steel and fiddle that could and should be the benchmark for 'cheating songs' whilst the following track, Step by step, is a mid tempo role reversal with him being the person left in the lurch, but again the instrumentation is just about perfect. Short and sweet is a mid tempo 'western swing' novelty song that works well and there is even a comedic element in the used car song As is. Done done it is a slightly unusual blend of 1950s rock 'n' roll and country that can't really be classed as 'rockabilly' but does work incredibly well. The album closer Somewhere in Texas is a beautiful sad 'leaving song' on which there is just Lilly and an acoustic guitar and with no other instrumentation to distract the attention, really epitomizes the soulfulness that he puts into his work.

The album is co-produced by Lilly and Tommy Detamore and is pretty much faultless in that regard. A recording such as this just goes to show that country music can have a little sprinkling of sugar on it and hopefully have mass appeal, without the need to layer everything with a thick coat of saccharine! I must confess to not usually considering albums that sit in this, what I've always considered, populist strand of country music, but I'm now going to investigate his previous work, thanks to this tremendous 'real country' album!

"...Recorded in San Antonio and Nashville, with it's judicious use of fiddle and pedal steel, and a Marty Robbins-like voice, John leaves no stone unturned as he lets those influences flow out of him in 13 original songs that you could swear are decades old. Be they honky tonk, western swing, semi-humorous or a killer tears in your beer song with a great hook line John remains focused on the end result, one of the finest albums of 2011. (It is one of the ten essential records of 2011 I selected for the No Depression poll.)..." Read the entire article

— No Depression - The Roots Music Authority; Posted by Amos Perrine on December 29, 201

Given that he’s normally a solo performer, as showcased on Live On Red Barn Radio (self, 2010), I’m not sure that the musicians Lilly enlisted for this album should properly be called “Guests,” but I have no argument with “Special.” Whether at Tommy Detamore’s studio in Floresville, TX, for nine of the 13 tracks, or Tim O’Brien’s in Nashville for three, Detamore and O’Brien, Mike Bub, Floyd Domino, Skip Edwards, Bobby Flores, Bill Kirchen, Sonny Landreth, Brennen Leigh, Tom Lewis, Ric Ramirez, Kayton Roberts and Johnny Staats are all pretty handy people to have around.

After opening with the catchy but cryptic Come And Go, Flores’ magisterial fiddle—nothing says ‘country’ quite like a Bobby Flores intro—and Detamore’s pedal steel launch a string of eight originals, seven lovelorn, including a truckdriver song, one celebrating the T wo Miracles of love that actually pans out, that are among Lilly’s best work. I have a limited taste for novelty songs, so even an off-beat ode to along-ago Yugo or lines like “We had no electricity so every night/we watched TV by candlelight” don’t warm me much to the next three tracks, but the album closes strong with the solo Somewhere In Texas, though those of us who live in Texas might cynically inquire where exactly “it’s raining tonight.” While the unassuming singer and songwriter is a strong performer, Lilly is, as one writer put it, “way too nice to be in show business,” but there was a time when he could have had a great career writing hits for country stars. Unfortunately, that time was 40 years ago, but fortunately, Lilly makes Old School records, this is his fifth, not including one he made with legendary old-time fiddler Ralph Blizard, and, if nothing else, from 2002’s Broken Moon on, he’s been a consistent favorite with the Freeform American Roots DJs and predicting he’ll be #1 in the November chart is a real safe bet.

This is John Lilly's finest album to date, for a variety of reasons. They are, from the top, the production by Lilly and the renowned Tommy Detamore, the use of a full band - Lilly's last two albums were more stripped down in terms of instrumentation - a band that includes some very fine players and at this point I want to single out the playing of Tom Lewis (former and current Wagoneer) who's name can be found on many an Austin recorded album as well as on stage with a wide range of players. He's never less that committed to the song and his varied but unobtrusive style is part of what drives any song he plays. It doesn't stop there on this album the talents of Kayton Roberts, Bill Kirchen, Sonny Landreth, Skip Edwards, Floyd Domino, Tim O'Brien and Mike Bub and others bring much to make the album special. But that, in itself, would not make a great album, without having the selection of great songs and Lilly's top-notch vocals it could have fallen flat on it's face. The songs are often heartbreak country and are delivered with conviction and honesty. That's a key word here, honesty as this is music not made for radio, for affectation, for mass sales but rather music made with heart, it is therefore music that will find its own level among discerning listeners. Tracks like I Don't Know Where To Start - a duet with Brennen Leigh (one of two), I Thought You'd Never Call, Anyone But You and the title track all speak of loss, sorry and regret - key elements of real country music. In some ways this is an album of two parts as from track 9 to track 11 the music takes on a different but equally effective tone as Lilly delivers a set of acoustic songs with Tim O'Brien, Mike Bub and Tommy Detamore musically accompanying him. Short and Sweet and As Is are both repeat listen songs. Then O'Brien joins the full band for Done Done It. The album closed with the song Somewhere In Texas which is equally compelling with John Lilly accompanied just by his guitar and shows that whatever the setting these songs and this singer stands tall. Undoubtably one of the albums of the year.

CHARLESTON, W.Va. -- Local singer/songwriter (and Goldenseal magazine editor) John Lilly seems to get more prolific as he gets older, and his latest album is his most fully realized release to date.

"Come and Go" opens with Landreth's gorgeous slide, easing into a song that instantly feels like a toe-tapping standard. Songs like "Cold Comfort" and "I Thought You'd Never Call" take cues from Hank Williams, one of Lilly's main sources of inspiration. "Tore Up From the Floor Up" pairs an old-school groove with Kirchen's stellar guitar work and an ear-catching solo from Mountain State mandolinist Johnny Staats.

Lilly spices up the mix with the truck-driving "I-95" (with Kirchen twanging away on baritone guitar), the Texas two-stepping "Step by Step," the gentle melodic folk of "Two Miracles" (with Tim O'Brien) and the dancehall swing of "Done Done Done."